The first locally built tram since 1994 is a step closer to running on the Yarra Trams network.

Since Bombardier was announced as the winning contractor for Melbourne's new generation of low-floor trams, the E Class has gone from drawing boards to computer aided design, scale models and a two-thirds length mock-up. Now the design of the tram has been finalised and Bombardier Transportation's Dandenong factory has begun producing the first test vehicle.

A total of 50 new trams have been ordered, adding capacity to the lines that they operate on and freeing up other high-capacity, low-floor trams to operate elsewhere around the network.

The same Bombardier factory which will build the E Class tram is also used to produce V/Line Vlocity trains.

The E Class tram has been designed in consultation with Yarra Trams staff and special interest groups representing passengers. The mock up of the tram was displayed at last year's Royal Melbourne Show to allow the public to provide feedback.

The tram will be approximately 33 metres long and 2.65 metres wide with room for 210 passengers. It will be fully air-conditioned and provide passengers automated audible and visible announcements.

B Class tram 2132, currently operating out of East Preston Depot, was the last of six trams built in Melbourne during 1994. Since then the tram fleet has added 100 low-floor trams, including the Combino from Germany and the Citadis from France.

Canadian-based transportation company Bombardier builds trams operating in 43 cities across the world, including Adelaide, Berlin, Istanbul, Manchester, Minneapolis and Toronto.  It has 63,000 employees in more than 60 countries.

Under the franchise model of Victorian Public Transport the state owns all trams and infrastructure and contracts KDR to operate Yarra Trams. KDR Victoria has been sole operator of the Melbourne tram network since November 2009. 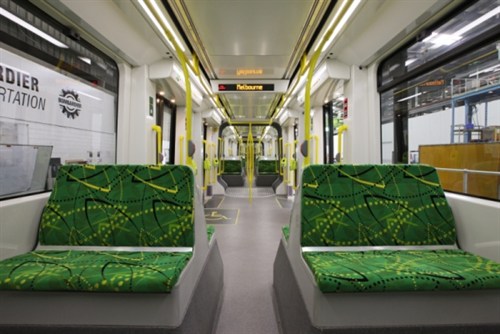 ABOVE: Inside the E Class tram mock-up at Bombardier.