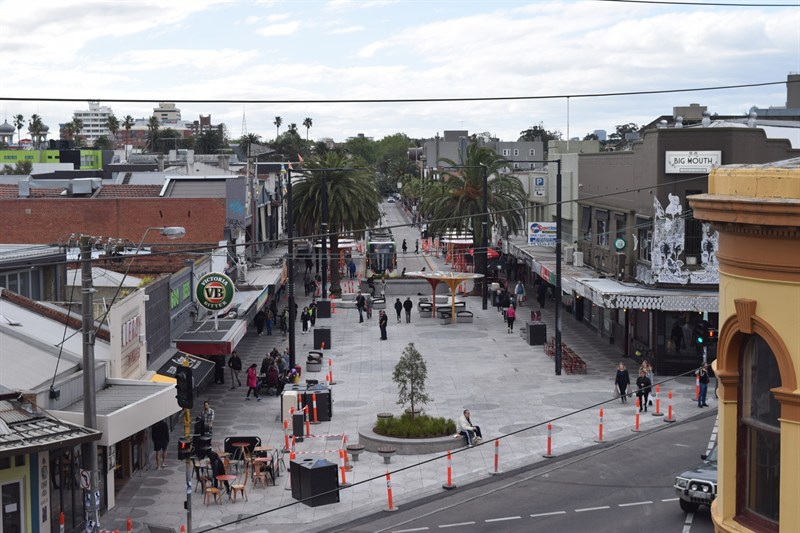 The first revitalisation of the Acland Street Precinct in over two decades is now finished, delivered in partnership with Public Transport Victoria, Yarra Trams, and the City of Port Phillip.

Public Transport Victoria CEO, Jeroen Weimar said the project was a result of a $72 million upgrade to improve Route 96, one of Melbourne's busiest tram routes.

"Acland Street has been revitalised for the first time in more than two decades into one of Melbourne's best shopping strips in partnership with Yarra Trams and the City of Port Phillip and as part of the Government's $72 million upgrade to Route 96," Mr Weimar said.

The newly designed terminus for Route 96 incorporates an accessible, pedestrian-friendly platform stop complemented by a completely redesigned streetscape delivered by Yarra Trams on behalf of the City of Port Phillip.

Mayor of City of Port Phillip, Cr Bernadene Voss said the new streetscape provides the perfect setting for seasonal events while allowing more capacity for the 30,000 visits by tram to and from Acland Street every week.

"The new public plaza, created through our partnership with PTV and Yarra Trams, will be a hub for community events and add to the vibrancy of the iconic Acland Street," Cr Voss said.

After more than 22,000 hours of work, Acland Street has received its first major upgrade since 1994, resulting in an integrated community space and a more efficient and accessible tram terminus for Route 96 which sees 345,000 trips per week.

Yarra Trams CEO Nicolas Gindt said: "Yarra Trams is proud to work in partnership to create places for people. This plaza project offers new vitality and accessibility to an urban space, and we are happy to see it already being used by its community."

Member for Albert Park, Martin Foley MP said: "The newly established pedestrian plaza provides open public space that is safer and more accessible to visitors and passengers with accessibility requirements, meaning more people can visit the iconic shopping strip than ever before."