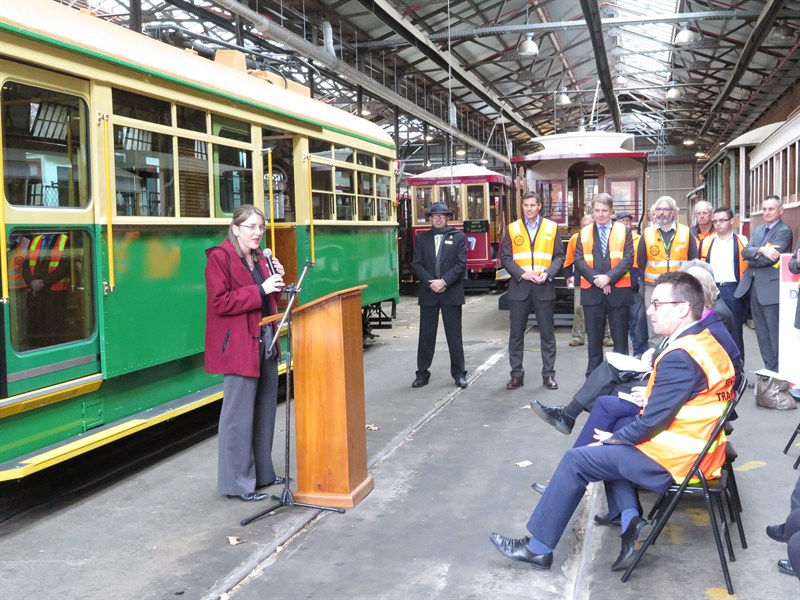 Above: Jacinta Allan, Minister for Public Transport, in front of the third fully restored W8-Class tram.

Minister for Public Transport Jacinta Allan was at the Bendigo Tramways Depot & Workshop on Wednesday 20 May to farewell the third restored W-Class tram on its way back to Melbourne.

This is the third refurbished tram returning to the City Circle tram route with the fourth tram currently being refurbished in Bendigo.

The Victorian State Government has invested a total of $8 million over the last four years to restore four W-Class trams.

The skill and expertise of Yarra Trams' project team at Preston Workshops on the first W-Class tram, laid the foundation for the work on the other two trams that has occurred in Bendigo.

The W-Class tram was designed by the Melbourne and Metropolitan Tramways Board in the 1920s as the 'standard' tram for Melbourne.

The majority of W-Class trams were withdrawn from service in the 1990s, but the trams continue to operate on the popular City Circle route and as part of the Colonial Tram Car Restaurant service.

Each restoration is a significant and complex undertaking involving the extensive stripping down and rebuilding.

The end result is effectively a tram in brand new condition with a new classification - the W8 class.

W-Class trams are an icon of Melbourne and we want Melburnians and visitors to our city to continue to be able to enjoy their cultural and historical significance.

The first two trams were delivered back to Melbourne in mint condition and are providing a smoother ride and more comfortable journey to the 3.3 million passenger trips on the City Circle tram route each year.

By restoring four W-Class trams and investing in 70 new low-floor E-Class trams, the Government is working to restore the heritage of Victoria's tram network as well as building for its future.

The third tram is now with the team at Preston Workshops for final static and dynamic testing, before it enters normal passenger service in a few weeks.

The fourth W-Class tram to be restored is expected to be completed by late 2015.